The hunting knife (with a leather handle) and sheath above were the first two leather products our grandfather taught me how to make. This was the foundation for making leather goods in my life.   Eventually I was learning about anything from saddle repair to belt making, to knot tying, and even how to make an amazing jump rope.  Because of this, our leather journals, leather sketchbooks, belts and anything else we come out with are filled with an inspiration through the affinity we have of learning, living, and using the moment to create what we can. 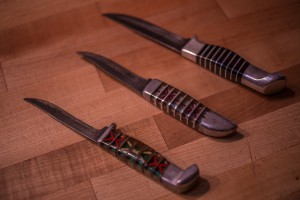 Raymond Cline was our grandfather.  He raised our parents (my father and John’s mother) on a small ranch outside of Payson, Arizona in Starr Valley, and was one of the few real cowboys left.  As a First Class Boatswain’s Mate in the Navy during World War II, he would use his spare time making useful things from the materials at hand. The knives you see to the left and below are examples. The blades are from cast-off mechanical hacksaw blades, the aluminum in the handles are from the propeller of a crashed Japanese G4M (“Betty”) Bomber, the clear plexiglass in the handles (on two) are from the window of a crashed Japanese A6M Zero fighter aircraft, and the colors in the handles are from nail polish he purchased while he was on leave in the Pacific. 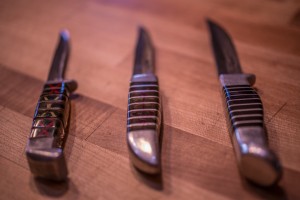 No matter what, he was always using what was around him to make something that someone would find useful.  Even when macular degeneration caused blindness in his later years, he made lead ropes and piggin’ strings for cowboys throughout the southwest United States because he had the material, and he knew someone would want it.  Of course, when any of my cousins, my sister or I expressed interest in a project he was working on, he always allowed us to watch and join.

With this holistic approach to creation embedded in our teachings and influence, it has become a moral compass in regards to our purpose and operations.  Our viewpoint: if we aren’t making something useful and appreciated, there is no point in making it.  Operationally, we focus on maintaining the smallest footprint possible, avoiding any shortcut that depreciates the quality of our leather goods, and viewing every person and every thing around us as a candidate for inspiration.